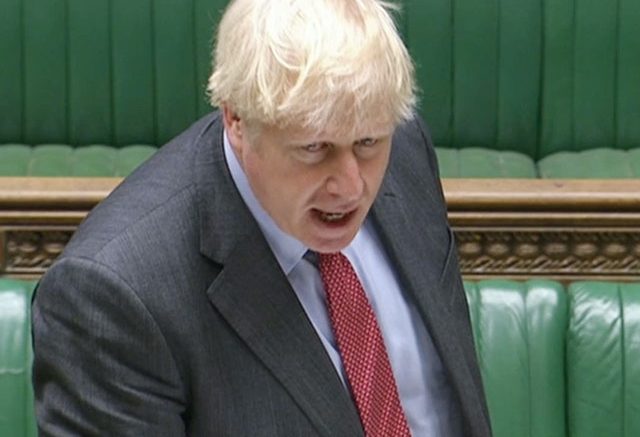 Measures are being tightened in the face of rising coronavirus infections, with Boris Johnson warning the UK has reached a “perilous turning point” in its fight against the disease.

Tougher restrictions are being brought in across all four nations, but vary – here, we take a look at the new rules in each country.

Working from home is once again being encouraged, with anyone who can being asked to do so.

People who cannot, such as those working in construction or retail, are being advised they should continue to go to their workplaces.

From Thursday pubs, bars and restaurants must offer table service only and hospitality, leisure, entertainment and tourism businesses all have to close between 10pm and 5am.

People working in retail, travelling in taxis, and staff and customers in indoor hospitality, except while seated at a table to eat or drink, must wear face coverings.

From Monday, a maximum of 15 people will be allowed to attend wedding ceremonies and receptions, but the limit remains at 30 for funerals.

The rule of six, introduced last weekend, that any social gatherings of more than six people are against the law, is being extended to all adult indoor team sports.

Large sporting events, business conferences and exhibitions will not reopen as had been planned from October 1.

The penalties for disobeying the rules are also greater – failing to wear a mask or breaking the rule of six sees fines doubling to £200 for a first offence.

Businesses which break the rules could be fined up to £10,000 and closed.

Fines of up to £10,000 for people who fail to self-isolate have already been announced.

Downing Street said military support was an option to free up police so they can focus on enforcing the tougher rules.

For people in the shielding category, Mr Johnson said the guidance remains that shielding is not currently needed, unless they are in a local lockdown area.

In a televised address on Tuesday evening, he said he was “spiritually reluctant” to impinge on people’s freedoms, but warned: “Unless we take action the risk is that we will have to go for tougher measures later.”

Northern Ireland has the highest infection rate across the UK and Ireland, and fresh Covid-19 restrictions were extended from some specific postcodes to the whole country from 6pm on Tuesday.

Households will no longer be allowed to mix indoors, except for single-person bubbles and certain other exemptions.

No more than six people from two households can meet in a garden.

But pubs which do not serve food, known as wet pubs, were able to open once again on Wednesday, despite the latest restrictions.

Deputy First Minister Michelle O’Neill said whether to introduce an early closing time for pubs is something ministers would consider, describing replicating the 10pm curfew being introduced in England as “fair enough”.

First Minister Arlene Foster said a two-week period of lockdown to try to halt the spread of the virus, a so-called circuit breaker, could not be ruled out.

Discussing the latest measures, she said: “We need to act, but I do want to reassure you that despite all of the headlines this is not a second lockdown.

“This is a wake-up call, a reminder that we are not out of the woods.”

Household mixing indoors will no longer be allowed, with exemptions for those living alone, couples not living together, childcare and tradespeople.

Regulations come into force on Friday but people are being asked to comply from Wednesday.

First Minister Nicola Sturgeon said children under 12 will be exempt from the current limit of six people from two households when meeting outside, and those between 12 and 18 will be able to meet a limit of six others from six households outdoors.

From Friday pubs, bars and restaurants must close at 10pm and further resources will be given to environmental health officials to step up enforcement and inspections, to check that social distancing and other hygiene guidance is being adhered to.

People in Scotland are also being advised against car-sharing, with Ms Sturgeon saying that according to Test and Protect data there is a “significant risk of transmission” in such settings.

She said no decision has been taken yet on a so-called circuit-break in October, and the Scottish Government is “keeping it under review”.

She asked people not to book any overseas travel for the half-term break unless it is essential, and to use it as an opportunity to “further limit social interaction”.

She said people who were shielding earlier in the year are not at this stage being asked to do so again, but that they should follow the steps outlined for the general population.

In an address to the nation, the First Minister acknowledged the measures might feel like “a step backwards”, but added: “We know what we need to do to protect ourselves and others – and all of us have a part to play.”

Pubs, cafes, restaurants and casinos in Wales must operate as table service only and close from 10pm on Thursday.

Off-licences including supermarkets will also be stopped from selling alcohol at the same time each day as part of the measures.

Only six people are able to meet indoors and must be part of a single extended household.

Face coverings must be worn on public transport, in shops and in enclosed public spaces across Wales.

First Minister Mark Drakeford said in a televised address: ““Families have lost loved ones. People have lost jobs and livelihoods. This is a highly infectious virus.

“We cannot let it take a hold of our lives again. We have come too far to let that happen.”

Additional measures across much of South Wales are due to come into force from 6pm on Tuesday.

The measures, which are already in force across Rhondda Cynon Taf and Caerphilly county borough, will apply in Bridgend, Merthyr Tydfil, Newport and Blaenau Gwent.

Under the new rules people must not enter or leave the areas without a reasonable excuse and are only able to meet with other households outdoors, including members of their extended household.

All licensed premises such as pubs have to close at 11pm.

– How long will these new measures last?

Mr Johnson said that “unless we palpably make progress”, we should assume the restrictions he announced on Tuesday will remain in place for “perhaps six months”.

Meanwhile, Ms Sturgeon said she hoped the measures in Scotland would not have to be in place for that long, saying that while the absence of a game-changer vaccine means the virus will impact people’s lives “that doesn’t necessarily mean that all of the new restrictions I am announcing today will be in place for six months”.

On Monday, England’s chief medical officer Professor Chris Whitty suggested that science would eventually “ride to our rescue”, but “in this period of the next six months, I think we have to realise that we have to take this, collectively, very seriously”.

What time will people have to leave pubs under the new rules?

In Wales, Mr Drakeford said pubs and restaurants would finish serving alcohol at 10pm, but people would be allowed to “drink up, to eat up, to bring their evening to an orderly close and then make their way home” beyond that point.

In England, officials said they had decided on a simple 10pm deadline which would be easier to enforce, meaning that venues would have to be closed to the public by that time.

Will cafes and fast-food restaurants have to give table service?

Not in England. While all restaurants and pubs will have to become table service-only, cafes and chains such as McDonald’s will continue to take orders at the counter.

Downing Street said the law will only apply to licensed premises, so those selling alcohol.

There will also be a “small number of exemptions” to the rule such as cinemas which serve alcohol, meaning table service would not be necessary in those circumstances either.

Does the “rule of six” apply to christenings?

Typically baptisms are carried out during Sunday services, which are exempted from the rule.

But “standalone life events” including christenings outside normal services will, from Monday, be subject to the six-person limit.

The Church of England has sought clarity from the Government, but it is understood the limit would include the baby.

How about “fledgling romances” during the pandemic?

During the early days of the lockdown, couples were told to move in together or stay apart.

But Government guidance has been updated to say that those in “an established relationship” do not need to socially distance from each other.

What exactly an established relationship means has not been clarified, but the guidance has sparked concerns that casual sex remains against the rules.