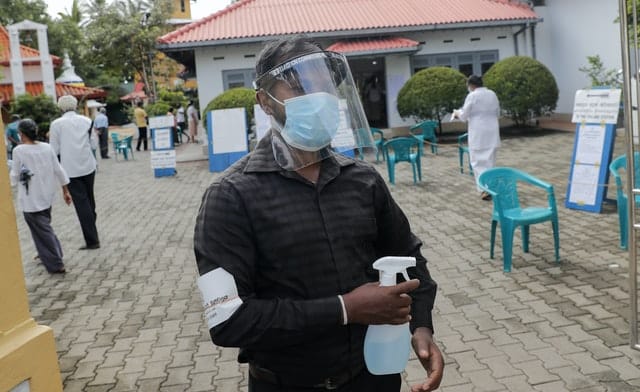 Sri Lanka’s powerful Rajapaksa brothers secured a landslide victory in the parliamentary election, giving them nearly the two-thirds majority of seats required to make constitutional changes, according to results.

The country’s prime minister Mahinda Rajapaksa is likely to be sworn in the same position by his younger brother, President Gotabaya Rajapaksa, after the vote that could strengthen dynastic rule in the Indian Ocean island nation.

“Sri Lanka People’s Front has secured a resounding victory according to official results released so far,” Gotabaya Rajapaksa said in a Twitter message as results were being released.

“It is my belief that that the expectation to have a Parliament that will enable the implementation of my ‘vision for prosperity’ policy will be reality tomorrow,” he said.

A party representing ethnic minority Tamils won 10 seats, and 16 others were split among 12 small parties.

The brothers need 150 seats, or control of two-thirds of seats in Parliament, to be able to change the constitution.

At least four small parties collaborate with the Rajapaksas’ party, so they appear to have mustered that support.

Jehan Perera, an analyst with independent think tank National Peace Council, said while a win for the Rajapaksa brothers was expected the proportion of victory was not.

“I thought there will be an erosion of votes (from the presidential election) and there will be some means of disillusionment at their performance,” he said, adding that voters had demonstrated the need for a strong and cohesive government led by strong leaders who could easily work together.

He said they also seemed to have considered security issues because disunity between the president and prime minister of the then-government is blamed for a security let down that led to last year’s Easter bomb attacks.

However, analysts say any attempt by Gotabaya Rajapaksa to push for changes that will strengthen presidential power at the expense of those of the prime minister may trigger sibling rivalry.

Sri Lanka had been ruled by powerful executive presidents since 1978.

But a 2015 constitutional amendment strengthened Parliament and the prime minister and put independent commissions in charge of judiciary appointments, police, public services and the conduct of elections.

Mr Gotabaya was elected president last November after projecting himself as the only leader who could secure the country after the Islamic State-inspired bombings of churches and hotels on Easter Sunday that killed 269 people.

Since being elected, he has said he had to function under many restrictions because of the constitutional changes.

However, Mahinda Rajapaksa is unlikely to cede any of his powers that might shrink his influence as he works on promoting his son Namal as his heir.

Namal and three other members of the Rajapaksa family contested the election and are likely to control key functions in the new administration.

The landslide victory also raises fears of weakening government institutions such as independent commissions for elections, police and public service.

Mr Perera says while it is not clear whether the power shift will favour the president or prime minister, there is likely to be unanimity in weakening the independence of state institutions.

He also said the government will likely be aiming at further reducing powers of provincial councils created for power sharing with minority ethnic Tamils, to allay the fears of majority Sinhalese who look at the councils as a means for division of the country.

A key feature in this election is the winner and runner-up being breakaway factions of the two of the oldest parties in the country that have held power for decades.

The Rajapaksas’ People’s Front is a breakaway faction from Sri Lanka Freedom Party that ruled the country many times from 1956, while the party that received the second highest number of seats is an offshoot of United National Party, considered the largest political party in Sri Lanka.

Both the traditional parties managed to secure only a seat each.

UNP leader and four-time prime minister Ranil Wickremesinghe lost an election for the first time since 1977 but is likely to be appointed to Parliament through the only seat the party secured on the national list.

More than 70% of the country’s more than 16 million eligible voters cast ballots in Wednesday’s election, held under strict health guidelines to prevent the spread of the coronavirus.

The vote was postponed twice by the pandemic.

Sri Lanka has largely contained the spread of the virus with 2,839 confirmed cases, including 11 deaths.

The US Embassy in Colombo congratulated Sri Lanka for holding a peaceful, orderly election despite the pandemic’s challenges.

It said it hoped the new government “will renew its commitments to building an inclusive economic recovery, upholding human rights and the rule of law, and protecting the country’s sovereignty” in a statement.

Indian prime minister Narendra Modi called his counterpart to congratulate him even as results started trickling in in the Rajapaksas’ favour.